How FireSafe Outlets Got Started

FireSafe Outlets was created by a New York City Fireman with over a decade of experience. After responding to countless electrical fires and seeing the devastation they cause, FireSafe Outlets was developed: the first outlet heat-detecting product with an alarm.

Today, a significant amount of fires in America are caused by electrical problems. According to the U.S. National Fire Protection Association, an estimated 47,700 home structure fires reported to U.S. fire departments involved some type of electrical failure or malfunction as a factor contributing to ignition. These fires resulted in 418 civilian deaths, 1,570 civilian injuries, and $1.4 billion in direct property damage. In 2007-2011, home electrical fires represented 13% of total home structure fires, 18% of associated civilian deaths, 11% of associated civilian injuries, and 20% of associated direct property damage. Each year in the United States, arcing faults are responsible for starting more than 28,000 home fires, killing and injuring hundreds of people, and causing over $700 million in property damage. Electrical distribution systems are the third leading cause of home structure fires. The U.S. Consumer Product Safety Commission (CPSC) reports that electrical receptacles are involved in 5,300 fires every year, causing forty deaths and more than 100 consumer injuries.

Overheating and Arcing
Overheating is determined by a number of visual and thermal factors that result in a
degraded outlet. Such factors included discolored metal conductors and plastic materials including wires, plugs, and the receptacle body, oxidation and/or corrosion deposits on metal conductors, charring and melting of plastic materials, glowing connections, loss of plating on receptacle screws, hot wires and rigid insulation, and dezincified brass components. Overheating occurs when conductors are severed, shorting takes places, series arcing occurs at screw terminals, and flaming ignition takes place. Overheating also encompasses overheating connections in which smoke and/or flames are emitted, electrical arcing takes place, and/or glowing connections result in electrical failure of the receptacle or a plug. Failures of receptacles include: shorting of conductors, severed conductors at or near the screw terminal, arcing at screw terminals, and flaming ignition.

Arcing is when an electrical discharge between 2 conductors occurs across a gap of air, a wet surface, or another medium, such as charge. Arcing occurs at a high temperature and requires either a gap of air or a very high voltage. There are two types of arcing: parallel arcing and series arcing. Parallel arcing occurs between 2 legs of a circuit and does not require a load. A series arc occurs in a circuit series when a load is present. Characteristics of arcing include but are not limited to: notches in metal components, small beads/globules formed near arc area, spatter deposits, resolidication waves, copper drawing lines and/or metal edges and lettering that are visible on the outside of the damaged area, localized damage with a demarcation line around the damaged area, damage on the opposing conductor, transfer of metal between conductors, and multiple divots or arc spots.

Arc tracking takes place across damaged conductors. Arc tracking occurs at a low
voltage such as 12-14V. During arc tracking, there is a leaking of currents. Mechanical damage, slats, moisture, or excessive heat break down wire insulation. As a result, there is a leakage of current between two conductors that were initially separated by insulation. This leakage of current generates heat, which creates a carbonized path that forms between conductors. This heated, carbonized path can start a fire.

If sustained arcing takes place, a number of events may occur including fused or melted metal, ejected molten particles, and/or pyrolyzed and ignited combustible materials. Additional, studies have shown that flaming ignition in plug connections also has evidence of arcing. Therefore, arcing and overheating can be understood as the two main causes of electrical fires.

Mechanisms for Overheating
Overheating stems from a large variety of factors including: length of conductor wire, wall insulation, outlet box, and faceplate materials as all four of these factors affect the temperatures that occur in the receptacle. Loose terminal connections, improper installation, alterations, aluminum connections, copper connections, screw terminal torque, back-wired connections, plug connections, and mechanical damage also have implications for overheating. Age and prior damage or deterioration also affect a device as construction including receptacles prior to the 1930’s are more prone to experience rises in temperature. Thus, a number of conditions degrade the level of safety an electrical receptacle can provide. for the purposes of
this document, only a select few of these factors will be explored.

Receptacle Material & Behaviors
Receptacle material influences its degradation due to overheating and/or arcing. Additionally, the propensity for a receptacle to experience a short is proportionally related to its inclination to melt. Three common types of receptacles are made of the following materials: Polypropylene (thermoplastic), PVC (thermoplastic), and Thermosets. When heated, polypropylene will heat and melt rather easily. Eventually, the receptacle materially will run, pool, and drip. In the case of PVC, which has plasticizers which aid in this product maintaining a degree of its shape, the PVC will heat, sag, and charr. Thermosets have a greater ability to maintain its structure at a higher temperature, but it will become brittle, cracked, and
charred. Materials within these receptacles may also become dislodged due to changes in its receptacle.

Back-Wired Connections
Back-wired connections have been shown as susceptible to overheating. Their ability to overheat is increased even by 1 removal and reinstallation. Additionally, back-wired connections overheated more than others during one year of cycle loading using 15A and 20A. These are also more likely to ignite proximate materials than side-wired receptacles.

Plug Connections
Plug connections can cause failures in multiple ways. Failures occur due to: loose contacts, manufacturing defects, mechanical damage, electrical contact and insulation degradation from heating, and contamination leading to arc tracking. Poor connections can cause receptacle materials to break down and overheat.

Mechanical Damage
Mechanical damage includes a number of factors including vibrations, removal cycles, and mechanical stress. In Benfer and Gottuk (2013), the study shows that in as little as 100 removal cycles, male plug blades can cause deformation of female contacts, creating poor grip in connections that result in charring and melting of receptacle faces. Pulling on a cord during removal can also cause mechanical failures as damage is done to the cord, affecting the plug interfaces. This damage leads to arcing at the interface. Mechanical stress also results when there is a breakage in the cord or plug junctions due to bending the cord back and forth. Strands within the cord are at times, broken. These broken cords and plug junctions can ensure into flaming conditions when an electrical load is applied as an arc occurs causing flaming ignition.

Loose Terminal Connections
Lead to overheating in the receptacles due to poor connections between wiring, and/or nickel plates and steel screws.. In wiring, there is a contact area between two conductors. This contact area is decreased when connections are loosened. The reduced contact area allows for oxide layers to form between the two conductors. This layer builds and creates a high resistance connection that heats up. This increased heat enables more copper oxides to form. The heat they generate can turn into a persistent glow, a signal of overheating. This glow has the potential to stay centralized in one place on the receptacle or to move along the service and create an all-over glow.

Improper Installation
All outlets are subject to overheating if improperly installed; Installation can still affect potential to overheat even if a load is not passing through it; Probability of overheating due to improper installation is increased if the receptacle is part of a series.

Copper Connections
Overheating and glowing in copper connections is caused by the formation of a semi-conductive oxide layer that forms between two conductors. 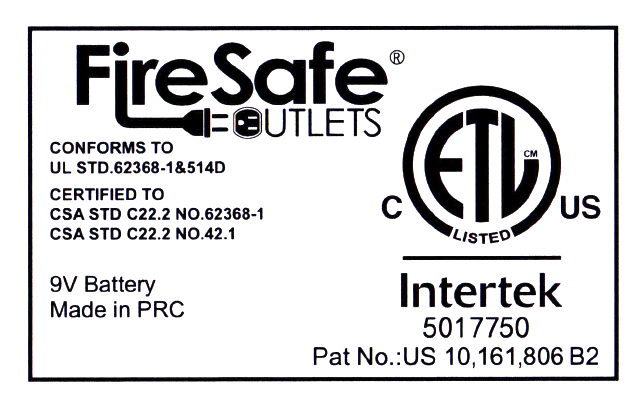